ALLEGED SCAMMER. The alleged scammer in Bohol, a certain Jhoann Eva (not her real name) allegedly uses the heartwarming images of the late Baby Yuan, a 4-month old baby who recently died of complications from a rare disease. Photo supplied..

MALAYBALAY CITY - The alleged online scammer in Bohol has apologized to the immediate family of Baby Yuan, a 4-month old baby who recently died of complications after he was contracted with a rare disease.

Solejon said Jhoann appealed to the family of the late 'Baby Yuan' not to tell authorities of her illegal activities. This, as Yuan's mom, Angel Misto, has threatened to report him to police authorities if she won't stop her alleged scamming activities online using Yuan's very touching  images while at the hospital in Malaybalay City in Bukidnon.

UNAWARE OF THE MODUS

Yuan's family said they were unaware of the modus of the uspect, that while they were attending to the critical condition of the baby, someone is using the baby's images in Bohol and she was asking for donations from friends and unsuspecting people on Facebook.

Baby Yuan's immediate family only discovered the modus of the suspect when one of her victims, who also live in Bohol, identified as Marissa Beachy, contacted them and reported Jhoann's illegal activities.

In her FB account, Mrs Beachy who married an American, contacted the immediate family of Yuan and told them about the suspect's illegal activities in their hometown in Bohol.

Marissa identified her as a certain Jhoann, 18 year's old from Tagbilaran City, Bohol. "I am one of her victims. She chatted me on Facebook and told me about the condition of the baby, then later solicited money from me," Marissa said.

MDNN contacted Mrs Marissa Beachy on FB and she also confirmed the modus operandi of the suspect.

Meanwhile, Solejon, Yuan's aunt also revealed that the suspect even made a 'fake account' of Baby Yuan and put the boy's image on the said account.

MDNN tried to connect the alleged suspect to air her side on the issue but she had already deleted her FB account. 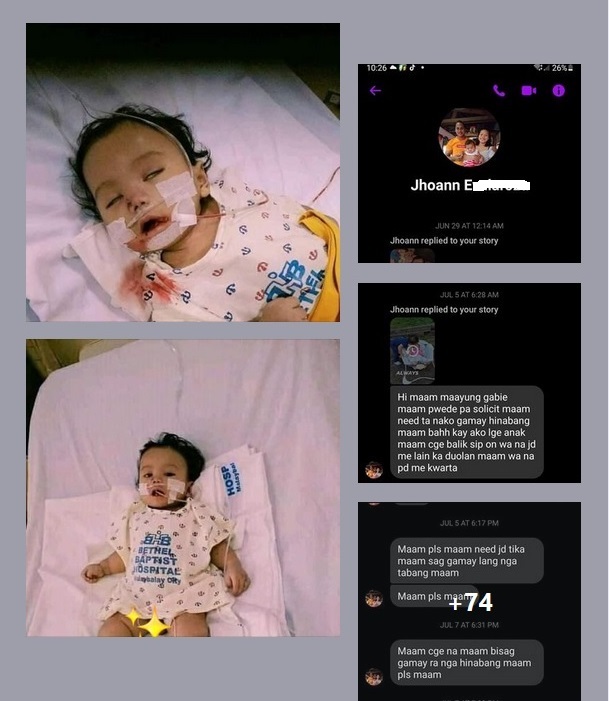 SCAMMER ALERT. The photos of the late 'Baby Yuan,' who touches the hearts of netizens and extended monetery help, are reportedly used by the scammer in Bohol to extort money from friends and unsuspecting people on Facebook. Photo supplied.