TATAY DANILO'S ANGEL. From day 1 of the old man's hospitalization only Ms Raiza Cuenca is always there to support him and show unconditional love for Tatay Danilo. But Raiza is human too, and soon she may feel exhausted. - photo credit to Raiza

2nd part of a series

GOD knows 'Tatay Danilo' () needs help at the right time so He sent an angel to assist him in the most challenging times, most especially now that he is suffering from acute tuberculosis (TB).

He was alone in facing the most difficult times of his life. BUT Tatay Danilo's angel in the person of Raiza came at the right time he needed the help most.

His attending physician advised Raiza that the old man cannot go back to the street anymore due to his diminishing health condition. The doctor, according to Raiza, found that Tatay Danilo has been suffering from TB illness many years ago but he just kept it to himself. This is the main reason why he needs prolong treatment and a rest period.

Raiza couldn't even understand why she is so keen on helping the old man up to the point of changing his clothes and cleaning his waste. 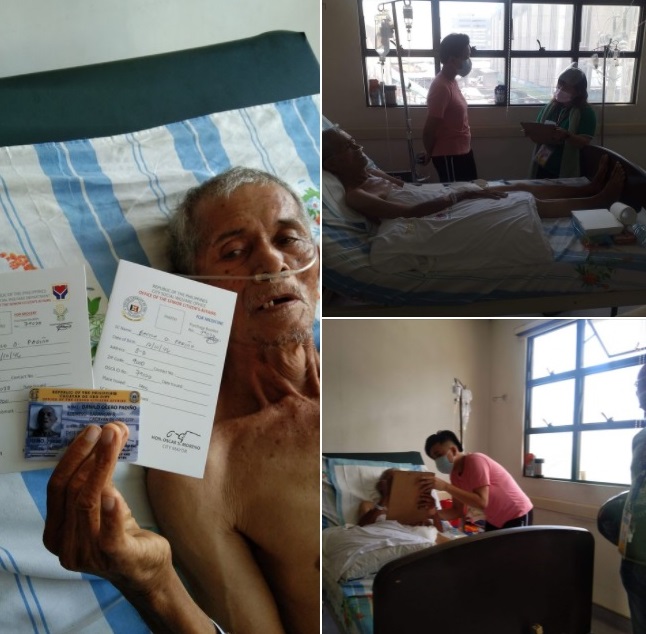 TATAY DANILO'S DISCOUNT ID. A social worker of the Department of Social Welfare and Development (DSWD) visits the room of Tatay Danilo and gave the old man a discount ID he can use in buying his food and medicine. Photo credit to Raiza

Here, we can simply say because Raiza is commissioned by the Lord to assist the old man in the remainder of his life, the reason that she is not complaining of everything she did to Tatay Danilo.

The Lord is making it all happens for the sake of the old man who was left alone in sickness and miserable life in the street.

Imagine Tatay Danilo sleeping in the building facade with only pieces of cartoons placed on the cold cement floor to protect his body from the colds. This, in fact, worsens the health suffering of the old man.

NO IMMEDIATE RELATIVES YET

It's been weeks now that Raiza is searching for the immediate relatives of 'Tatay Danilo' but her attempt proved futile. She is having difficulty locating Tatay's wife and daughter.

Raiza has been praying someone could help locate Tatay Danilo's immediate relatives so that they would know the old man needs them very badly at the hospital.

Right now, she continued to take care of the old man because she knew no one would ever dare to help Tatay, especially in 'caregiving' tasks that the old man needs.

Raiza says many people are asking her why she isn't afraid of Tatay's TB. Raiza says when she met Tatay Danilo she wasn't thinking of his health condition.

"I never knew he was suffering from tuberculosis. I only enjoyed watching him feeding the pigeons (kalapati). Not until we talked and I learned about his health conditions.

She said "To be honest he (Tatay Danilo) did not ask me to help him. I was the one who offered help and iassist  sya sa check-up.
Di pa gud unta sya musugot kay grabeg trust issue."