HEART OF GOLD. Photo shows the flawless looking Raiza Cuenca (Astrid Cuenca on Facebook) during her early visits with Tatay Danilo. Raiza is touched by Tatay's present situation that at age 74 he is still making a living to survive while living alone in Cagayan de Oro, wtth no relatives and siblings helping him.

THE INTERVIEW. Raiza asks questions to Tatay Danilo as she gets interested of the old man's life story why he is still at DVsoria making a living despite his age of 74..

Tatay Danilo, as fondly called by friends and those who knew him, is living alone in Cagayan de Oro and he only sleeps just outside of a building near Amphitheatre at DVsoria. His wife and daughter live in Manila and they have lost contact, so the old man is making a daily living selling cigarettes and candy at the DVsoria by day just to survive his daily need for food. 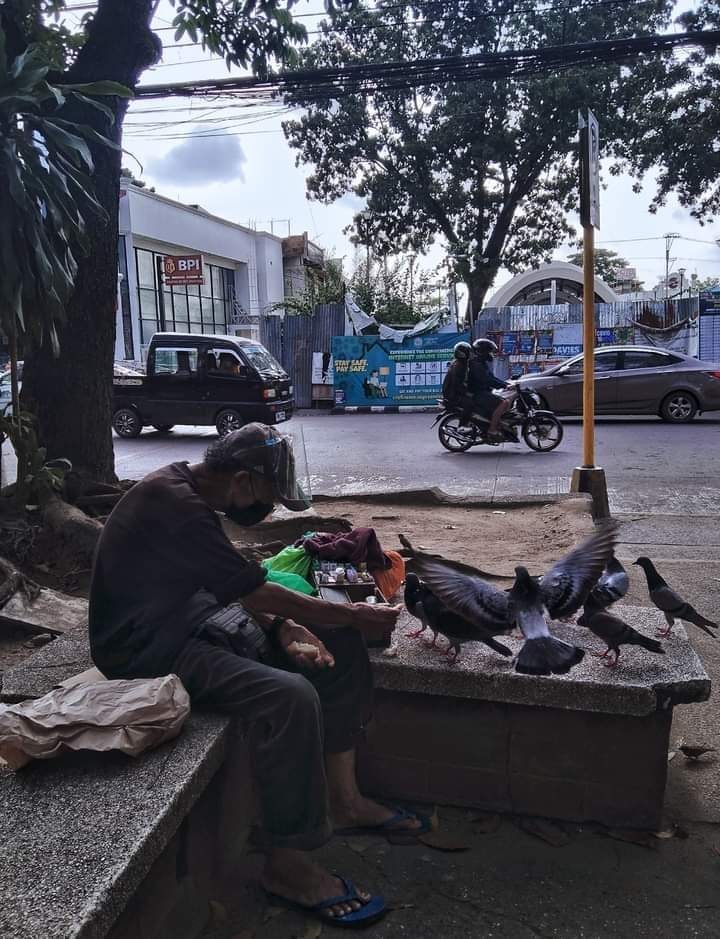 ​NEW FRIENDS. Despite living alone in Cagayan de Oro, Tatay Danilo finds these birds (kalapati) his new friends. The birds give Tatay strength and new hope to continue living amidst the challenges in life and in his present health conditions. Tatay has TB and he is only keeping it to himself. - Photo credit to Raiza.

But he doesn't make it a problem. He continues selling cigarettes and candies by the day, to make a living. Although he was alone. Surprisingly, Tatay Danilo has a lot of bird friends who meet and visit him every day to get food from Tatay. So every time the birds swarm near Tatay's location at DVsoria where he displays his cigars and candies, Tatay would prepare the birds' food. He has his bread ready to feed his newfound friends at DVsoria.

Who would ever think that the birds choose to make Tatay a friend? The birds enjoy a sumptuous meal every time they are with Tatay Danilo. So the scenario of the birds often visiting Tatay Danilo was only normal for people in the area. Many of the people would envy Tatay for having many friends he enjoys feeding every day. But the birds find Tatay more appealing to them despite Tatay's health conditions - an old man at 74.

Tatay Danilo is a picture of an untidy old man with perhaps, no proper hygiene. Many passers-by would just ignore him and others would only approach him if they needed to buy cigarettes or candies from the old man. But they wouldn't know Tatay's diminishing health condition that he only kept to himself.

Maybe Tatay knows he has only a few years to live and he just enjoys the remaining years of his life because of his current health problems.

One day, a happy-go-lucky Raiza Cuenca (as she called herself) passed by at Tatay Danilo's location at Divisoria and the old man enjoyed feeding his bird friends. Raiza got amazed and mesmerized at what the old man was doing and she went near to the old man.

Raiza called herself a happy-go-lucky person because she has achieved nothing at 26 now.

"That is why, I loved to help him even if I know myself na walang-wala jud but I know na makadiskarte ko, was Raiza's feeling after she was moved at how the old man positively accepted his present condition with no questions and blaming the Lord...TO BE CONTINUED