This Labor Day, foodpanda proudly honors its riders as heroes in the frontlines -- delivering food and other essentials to their customers’ doorsteps so the rest of us can stay safe at home. They are true heroes to their community, to their customers, and to their families.

foodpanda shares these stories of riders who bravely face the everyday challenge of working through the pandemic, motivated by different reasons towards their mission to deliver quality service.

Hero for the community

25-year-old John Kevin Cuneta has been a foodpanda rider since October 2020 and aside from the fact that he likes the uniform that he dons for the job, he has formed friendships with many other foodpanda riders in his area.

They have a Facebook chat group, he says, and because of his experience with outreach programs in places where a calamity has occurred, he has mobilized the other riders to do charity work in their community. A fire broke out recently in Pasay, where they are based, and the riders chipped in to help their co-riders, along with other families who lost their homes. “Monthly na iyang program namin. Kung walang mga pangyayari tulad ng sunog, nagbibigay kami ng pagkain sa mga homeless.  Ang mga asawa namin ang taga-luto. Makikita mo talaga ang saya ng mga tao kapag nag-aabot kami ng maliit naming tulong,” he smiles.

Being on the road as a delivery rider since 2016, he has encountered the challenges that many other delivery drivers face and he felt the urge to document what they do, to show the public what goes on behind an efficient delivery. He went around on his shifts with his DSLR camera, and started taking photos of the other riders at work. “Minsan kasi nakakalimutan ng mga tao na kaming mga delivery riders ay frontliners din. Kami ay talagang gumagawa ng paraan para ma-satisfy ang aming mga customers. Halimbawa niyan, kapag may natapon na soft drinks, bumibili kami sa tindahan para mapalitan ito, kasi ayaw namin na hindi masaya ang customer.”

Known in his circles as “Mr. Pitik” and with his camera work gaining notice on his Facebook page, his photography hobby has now grown into a side hustle, where he has been commissioned to shoot intimate gatherings and events. 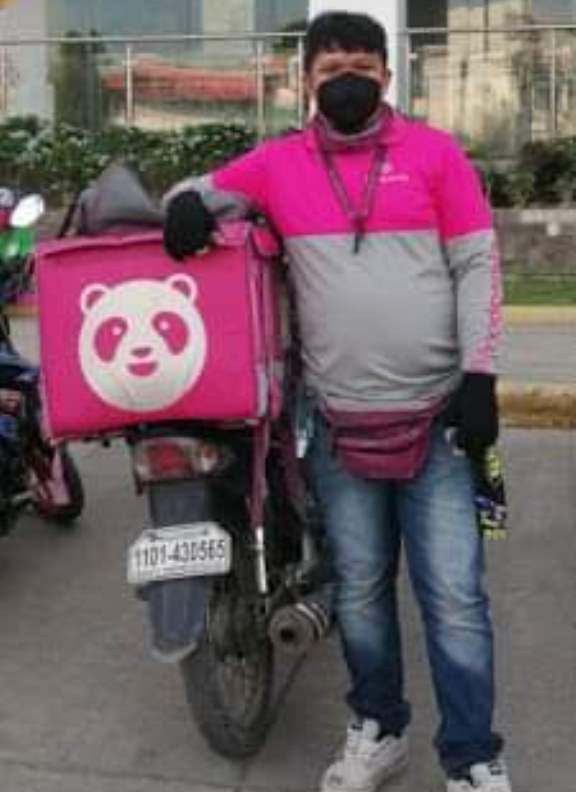 Hero for the customers

Jhan Camsa has been a foodpanda rider in Davao City since March 2020, and his service definitely went above and beyond customer expectations. He recounts the time he received a booking from a customer during a flood. The 31-year-old says he risked his personal safety just to make sure that the order went through. “Hanggang tuhod na ang baha, paikot ikot ako, naghahanap ng paraan, pero hindi na kaya ng motorsiklo ko na dumaan,” he described.

His customer was so surprised, he says, “Akala nila ika-cancel ko. Pero tumawag ako sa kanila na papunta ako habang nilalakad ko na yung mga 500 meters papunta sa kanila.” The appreciative customer gave him a tip, he says, and they worried about his safety. He says, though, that it is all part of the job, and mentions that his wife was filled with pride when she heard what he did. “Ginawa ko lang po yung trabaho ko as a foodpanda rider, para din po makita ng mga customer, na kahit ulan, init, baha, nag-dedeliver talaga ang mga foodpanda riders. At tsaka po para din sa pamilya ko. Kasi marami akong pangarap sa buhay.” Jhan says he hopes that with his earnings as a foodpanda rider, he will be able to save enough to start his own business someday.

Hero for the family

His earnings as a rider is enough to sustain their needs and is also able to support his wife’s online studies.This is why, every day, he sets out from their Valenzuela home to his beat in the Quezon City area where he works for as long as 10 hours.

The stories of John, Jaime, and John are only three from among the foodpanda riders who demonstrate determination and compassion. They are frontliners who show courage despite the challenges of the pandemic situation in order to help others, and in order to achieve their dreams. foodpanda invites its customers to show their appreciation the next time they receive a delivery from these heroes in pink.