The Sun Crew cleans up Siargao

Wahines on Waves
School children show of their class attendance records to qualify for The Sun Crew's Smart, Sustainable Surfers Program.
One of the two available styles of Sun Crew tees. 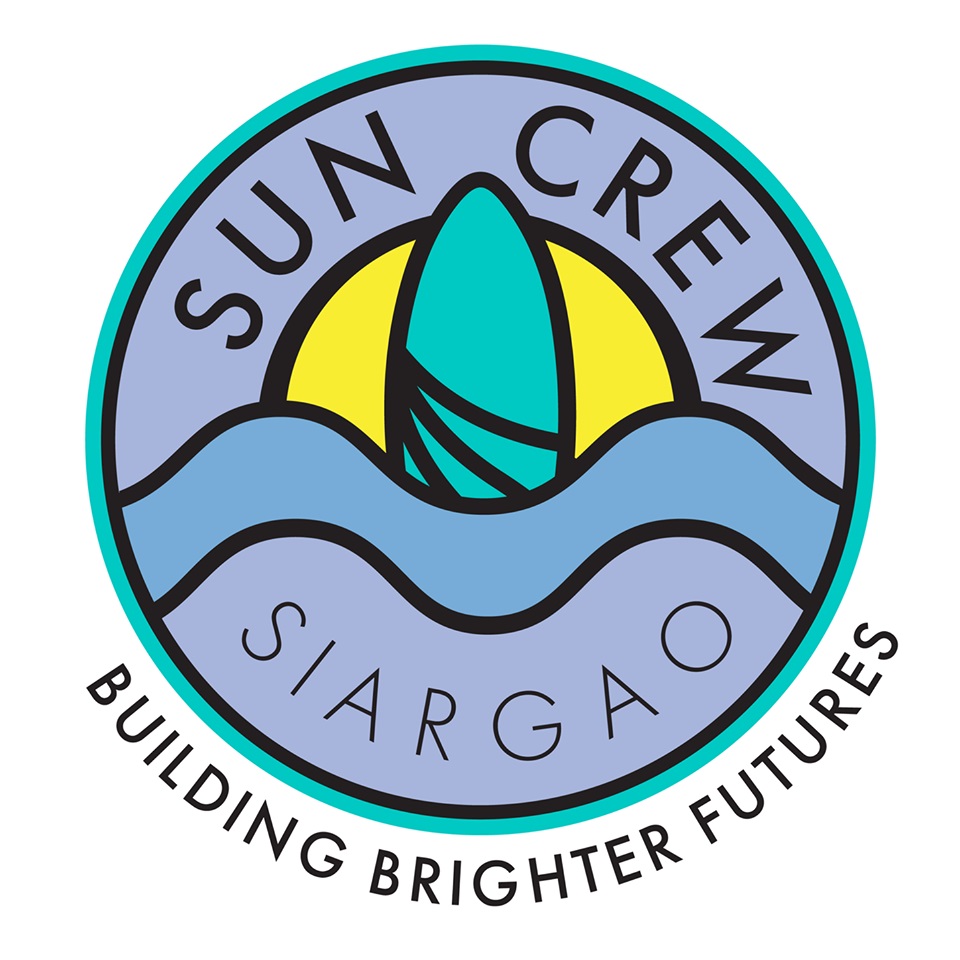 SIARGAO , SURIGAO DEL NORTE– A community based group has been cited by Coca Cola Philippines for its efforts to keep the Surfing Capital of the Philippines free from The Plastic Scourge. 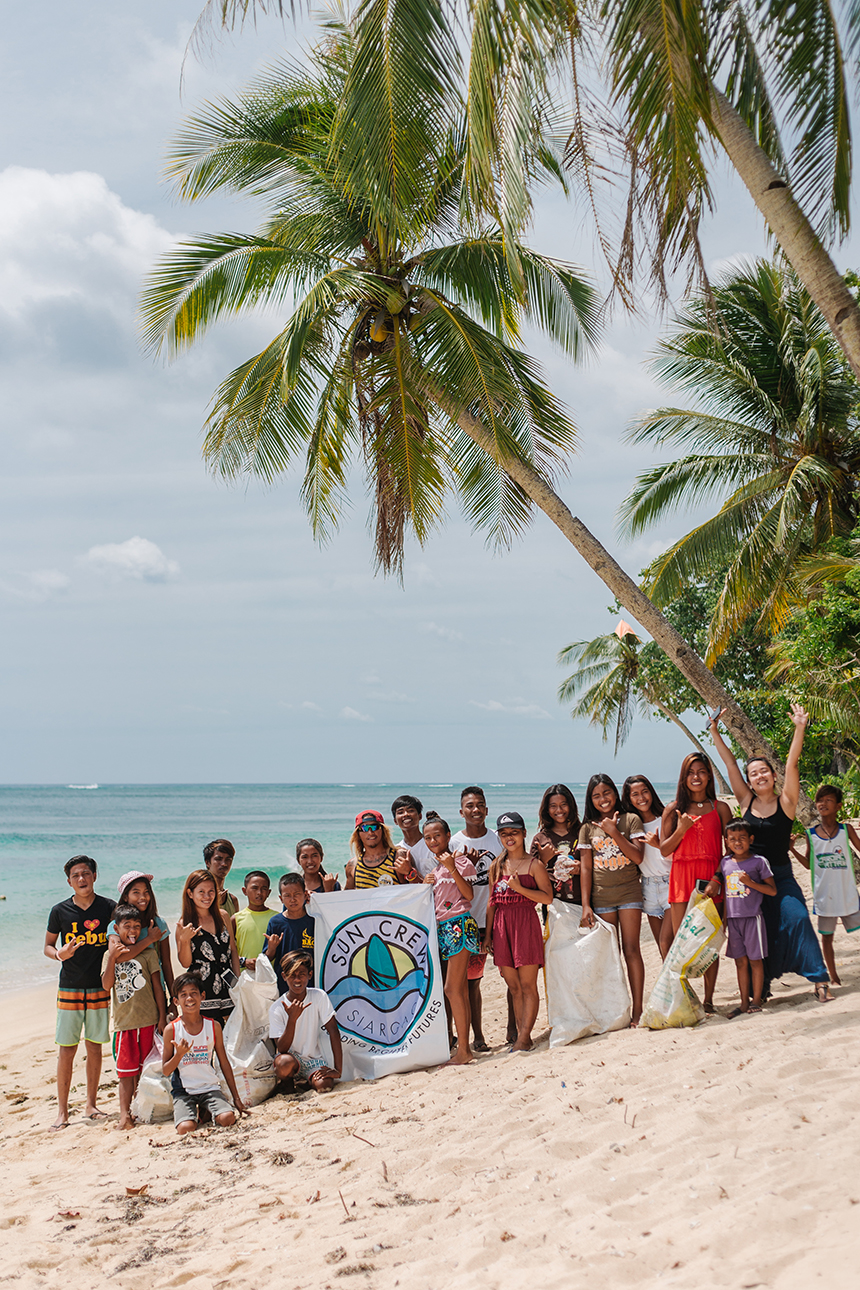 The Sun Crew at Barangay Pacifico

According to its website, The Sun Crew are fighting poverty and plastic pollution on Siargao Island.

“We use surfing and education to empower women and children to rise out of poverty and be the leaders in the fight to preserve their communities and protect the environment.”

“Our aim is to ensure the children have the skills and opportunities to overcome poverty and play a key role in protecting their island and local communities.” (haranasurf.com)

“We started this in 2017 as a means of keeping kids from idleness and roaming around looking for mischief,” Bonono said. “I was also like them when I was young and I don’t want them to end up like me who did not finish my education but instead think ahead about their future.”

Bonano and his Australian girlfriend Hannah Boyer came up with the idea to organize Sun Crew to teach children how to surf in exchange for cleaning up the beaches. Those who excel would be given lessons and time to use surfboards brought by Hannah from Sydney. Most of the boards are donated by Australian surfers and Hannah brings them back from Sydney.

Dubbed “Smart, Sustainable Surfers”, the project uses the children’s love of surfing as the incentive for participating in education, sustainability and skills programs. The project aims to create a generation of well educated, environmentally conscious students who have the skills and opportunities necessary to alleviate poverty and protect the environment.

Children earn ‘SSS Points’ by attending school and participating in project activities such as beach cleans, eco-bricking workshops, English classes and a variety of skills classes. The number of points earned at the end of each week determines which children can use the Sun Crew boards.

Children must attend school for a minimum of 4 days to be eligible to surf and members with the most points get first dibs at board time. Surf instructors from the local community are employed to ensure the safety of the children while in the water.

The project is designed to teach children about the importance of education, believing in their own potential, and demanding more from themselves and their communities.

Some 50 kids aged 8-16 years have so far benefitted from the project. However, older kids who just want to learn how to surf and help keep the environment clean have also been involved in the project.

“We don’t allow kids to borrow the surfboards if they miss their classes,” Wemar said. “If they study, they can borrow the boards anytime during weekend. We get their attendance every Friday to verify if they indeed attended classes.”

The Sun Crew have adopted Sustainability, Education and Empowerment as its Core Values.

“The ocean provides rural island communities with food, income and ultimately life and preserving the ocean is at the heart of all of we do.”

“We believe the fight to overcome poverty and the fight to address plastic pollution are the same fight, and education is the key.”

“We believe that empowering women and children with skills, knowledge and opportunities is the best way to create effective, lasting change.”

Besides Smart, Sustainable Surfers, the group are also undertaking other projects such as Plastic Forward as its local solution to address the plastic waste problem facing the Philippine seas and oceans worldwide.

“Our SSS kids collect plastic wastes from households every end of the month and help us in our beach clean-up every weekend. On weekdays, they also help us cut up soft plastics like sachets and these form the material we use to make pillows that we use. In the future we hope to sell these also to raise funds for our projects,” Wemar said.

Tours with Impact is designed to ensure local residents are the major benefactors of tourism in Surigao through their Charity Surf School that employs local people from rural villages with 100% of profits go towards creating fair-employment for local people and supporting our education, sustainability and skills programs in the local community.

Not the least, Wahines on Waves aims to empower women to uplift communities from poverty by creating lasting change.

This project enables young girls to surf and to be actively engaged in their education, encouraging them to pursue a future beyond the traditional role of women in rural communities.

“We work with local women to educate them on sustainable practices and empower them to be the leaders in the fight to protect the environment. We employ local women to run our programs, providing stable income to multiple families in the community. We believe that supporting these women and their children is the key to the achieving the sustainable island communities we are working to create.”

At present, The Sun Crew’s activities are confined to Siargao but they plan to extend to Baler, Aurora; Surigao del Sur, and other surfing destinations in the future.

Now 23, Wemar started surfing when he was only 10 in his hometown of Barangay Pacifico in San Isidro Municipality. He taught himself surfing but was later coached by Manuel Melindo of Cloud 9 when he joined Team Siargao.

For the long term, The Sun Crew plan to acquire a plastic recycling machine and have submitted a proposal to Coca-Cola Philippines for consideration. The Sun Crew would also like to contribute their equity investment in the machine which costs from P100, 000-500,000 depending on the brand and quality.

Besides donations from supportive institutions like Coca-Cola Philippines, The Sun Crew also raise funds through the sale of tee shirts in partnership with Kermit Gwapitos which donates 100% of the proceeds to the group for its projects.

Should you find yourself someday in Siargao, you can clean and surf on Saturdays and Sundays with The Sun Crew at Pilar, Pacifico and Alegria towns. Proceeds from their tours, surf lessons and board rentals go towards educational programs aimed towards helping local women and children. fb.com/thesuncrew; IG: @thesuncrew

Driving between Bukidnon and Cagayan de Oro: A Freak Accident