CAGAYAN DE ORO (MDN digital, May 10) - A top official of Mindanao Development Authority (MinDA) died Thursday (May 9) of Pneumonia illness. He was 73. 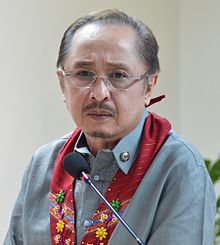 Before he died, MinDA secretary Abul Khayr Dangcal Alonto was already admitted at a hospital in Quezon City two weeks ago. He underwent a series of medical examinations as he complained of chest pains. One of those tests was agiogram afterwhich the result revealed the Muslim leader was having a blocked coronary arteries.

The late Alonto also underwent Angioplasty but complications even worsened his health including complications with his lung problem.

Alonto's remains will be brought to Marawi City today, May 10, where a burial is also scheduled based on muslim traditions. A dead Muslim is usually buried within 24 hours.

Secretary Alonto was the son of Lanao's first governor. He studied political science in Cairo University in Egypt. He also studied law at San Beda College.