LIMPING SUSPECT ARRESTED. A limping suspect was arrested this morning by pursuing police operatives after a concerned citizen tips off his presence in Purok 4, a few meters from the bridge they jump off.

High caliber pistols are recovered from the white Mitsubishi vehicle used by the five suspects. - Photo credit to iFM

One of the five suspects lies dead beside the road after a shootout with police force manning the Libertad checkpoint. - Photo credit to iFM

SLAIN POLICEMAN. MSgt Ronald Caayupan, one of the policeman manning the Libertad Police checkpoint dies after a shootout yesterday with lawless elements who try to hurdle the checkpoint. Instead of stopping the vehicle, the suspects open fire which resulted to the shootout. - Photo credit to owner

LIBERTAD, Misamis Oriental - Police operatives of Libertad Municipal Police Station arrested Tuesday morning (February 18) a limping suspect who only hide a few meters away at a bridge they jump off after several minutes of running gunbattle yesterday evening with the police manning the checkpoint. 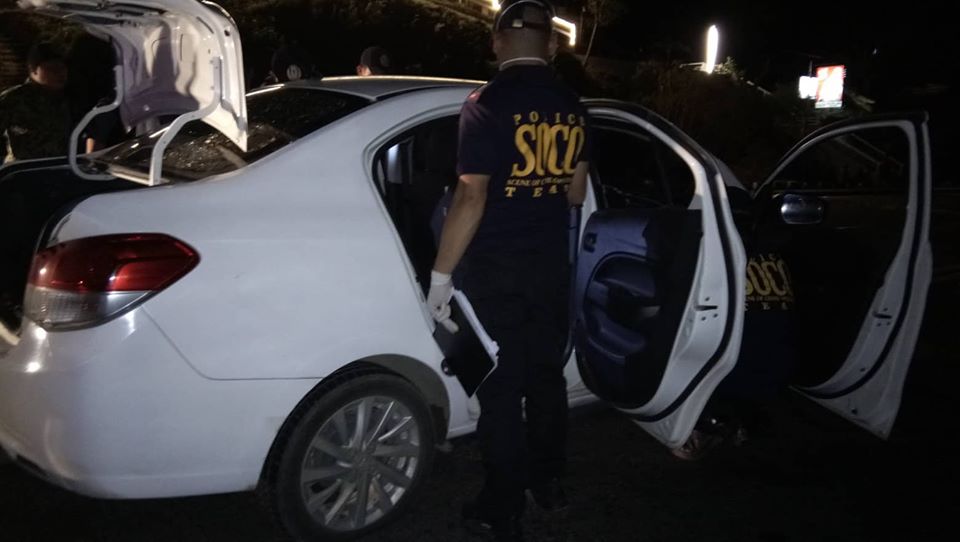 Members of the Scene of the Crime Operatives (SOCO) check the white Mitsubishi vehicle used by the suspects. - Photo credit to iFM

The four suspects would have thought there was body of water under the bridge at around 9pm yesterday amid total darkness to which they jumped off to elude arrest from pursuing police operatives.

Libertad Police Captain Ram Camelotes identified the arrested suspect as one Richard Perez, 31 of Bangkal Cebu City but temporarily residing at Barra, Opol, Misamis Oriental. He was seen by a resident near the area with a broken leg and was immediately reported to the police, sensing he was one of the suspects.

Early morning today, a team of heavily-armed police force from Libertad police station went down under the bridge after they received reports about traces of blood were found by concerned residents and a limping suspect was seen a few meters under the bridge.

Alex Ugsod, a resident of Purok 4, Libertad town told Magnum Radio he saw the suspect who undressed his shirt at the hilly portion a few meters from under the bridge. He could barely walk as he has broken left leg.

Sensing he was among those who jumped off from the bridge last night, Ugsod said, he immediately reported the suspect's presence to police operatives, after which at around 6am this morning, a hot pursuit was again made which resulted to the arrest of the limping suspect.

Earlier last night, two people were killed during a sudden exchange of bullets at a checkpoint in Libertad town, Misamis Oriental, between police operatives manning the checkpoint and five heavily-armed suspects on board a white Mitsubishi vehicle.

During initial investigation conducted by the Scene of the Crime Operatives (SOCO), a dead body was found at the crime scene, shoes, illegal drugs, wallet and identification cards, a white Mitsubishi Mirage vehicle owned by the suspects, 48 empty shells of high-caliber pistols, 4 pieces of caliber 45, and 1 piece of KG9 rifle.

Those who died from the police side after the gun battle was identified as Ssgt Ronald Caayupan, while the other dead person from the suspect's side was unknown at press time. SSgt Caayupan was still rushed at the nearest hospital but he expired later.

Board member Dexter Yasay in an interview with a local radio station said Sgt Caayupan flagged down a white Mitsubishi Mirage vehicle but instead of stopping the vehicle, the suspects opened fire at the policemen manning the checkpoint which resulted in several minutes of gun battle. Afterwhich, amid darkness, the four suspects fled from the crime scene and jumped off at the bridge thinking there was a creek - which resulted to the leg injury of Richard Perez, one of the four suspects who jumped off the bridge.

Those who were wounded during the skirmishes were identified as Police officer Fernando Maestrado and a civilian Gemma Patlunag. They were immediately rushed to the nearest hospital for treatment.

Misamis Oriental Governor Vincente Yevgeny (Bambi) Emano also told reporters the Provincial Government will extend some help to the immediate families of the police who died, as well as those wounded policemen taken to the hospitals for treatment.

Meanwhile, a team of police operatives are now pursuing the suspects believed still in the town of Libertad but were only hiding.